NEA Big Read – Out in the Community

Here you’ll find an overview of the Pocumtuck Valley Memorial Association’s NEA Big Reads since our first award in 2007. 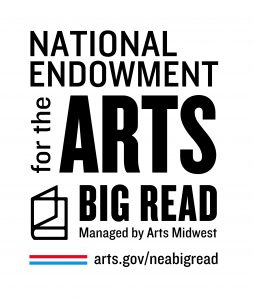 The Pocumtuck Valley Memorial Association launched its 7th National Endowment for the Arts (NEA) Big Read in Spring of 2021, in partnership with Tilton Library and more than 40 other organizations and businesses in Franklin, Hampshire, and Hampden counties. PVMA was one of 84 communities nationwide awarded an NEA Big Read grant for 2020-21. Our Big Read programs have reached and engaged diverse audiences—with titles chosen for their connection to our museum collection and educational programs, and relevance to our community. 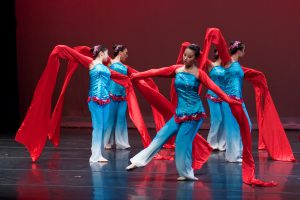 Each of our NEA Big Read programs, in its own unique way, has done just what the NEA says a Big Read can do—that is, “broaden our understanding of our world, our communities, and ourselves through the joy of sharing a good book.”

.
Each program is briefly summarized below, beginning with the most recent.

Emily St. John Mandel’s 2014 novel is set in a dystopian post-pandemic world. As PVMA marked its 150th anniversary, we were drawn to “Station Eleven” in part because of the Museum of Civilization that emerges in one of the surviving communities . We thought about the artifacts in our Memorial Hall Museum and how many of them were once a vital part of everyday life, but are now obsolete–like the cell phones and credit cards in the Museum of Civilization. 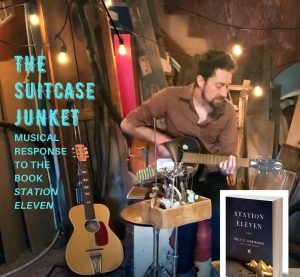 We knew this novel would draw interest in our community. What we didn’t know when we chose the title in 2019, was that we would be facing an actual pandemic just a few months later! Launching a valley-wide Big Read in 2021 was a challenge, but strong partnerships made it possible. Learn about all the partners who contributed here, and the exceptional variety of programming offered here, including “A Conversation with Emily St. John Mandel” virtual visit.
. 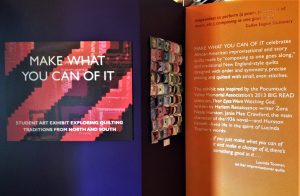 look into her aunt’s life, with local musicians honoring that life and her writing at a celebratory event afterwards. Elementary and middle school students explored African American quilting and the values of improvisation with contributions to a student art/history exhibit, including a visit by the middle school students to the exhibit venue and an Improv music lesson.
. 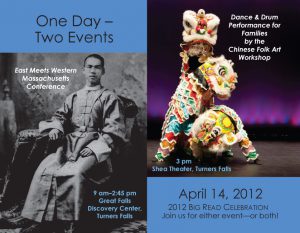 Student art filled the venue for the Speaker Day at the Great Falls Discovery Center’s gallery with dragons, lanterns, and original board games; and friends met at a local pub to make Chinese-inspired accordion books and learn the game of Mahjong while sharing stories of their own mother-daughter relationships.
.

Exploring Tim O’Brien’s novel during this NEA Big Read deepened PVMA’s relationship with the Veterans Education Project and provided multiple opportunities for our community to come together in conversation about war’s impact.

Memorable programming included a photography exhibit with portraits of veterans—young and old—with something of their choosing representing “the things they carried” in combat. A short personal statement was displayed alongside each photo. An exhibit, “Told and Retold–A Conversation Starter,” in another venue

featured pastel portraits created by middle school students of members of their own families who served in the military or local veterans they learned about through Memorial Hall Museum’s collection.
.

Memorial Hall Museum was built as Deerfield Academy in 1798 and today, Deerfield is home to several private schools, including Deerfield Academy. Exploring themes around education—private and public, formal and informal—was a perfect fit for our organization.

Highlights of this NEA Big Read included a traveling history and student art exhibit co-curated by high school students exploring the evolution of education in New England; a Museums a la Carte presentation at the Museum of Fine Arts in Springfield; a Society for Children’s Books Writers and Illustration panel discussion at the Eric Carle Museum titled “My Biggest Writing/Illustrating Challenge and How I Solved It”; and a Circa ’60s 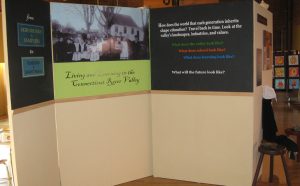 Music Madness karaoke event at the Academy of Music in nearby Northampton. Smaller events celebrated the art of writing with papermaking and bookmaking at a local pub.
. 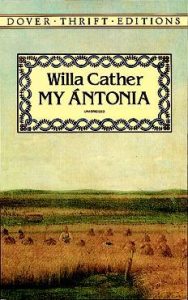 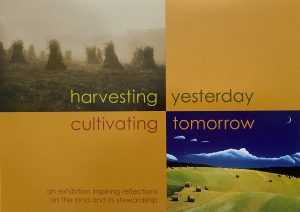 Highlights included a theatrical production of the play, a visit by Betty Jean Steinshouer to the Academy of Music and our regional high school depicting Willa Cather, and “Harvesting Yesterday, Cultivating Tomorrow,” an exhibit of adult and student art, along with reproductions of photographs of the farmed landscape from Memorial Hall Museum’s Frances and Mary Allen collection, co-curated by high school students.
. 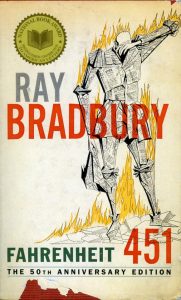 Ray Bradbury’s classic and perennial bestseller was chosen for our first NEA Big Read as an opportunity to explore the Constitution’s First Amendment with educators in our Deerfield Teachers’ Center and middle and high school students at our regional high school. 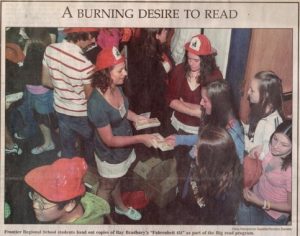 Highlights included fire engines in four towns surprising students with a fire drill before an all-school assembly on Constitution Day with distribution of books and fire hats and community speakers exploring the topic of censorship, a full-day seminar for educators, and a showing of the 1966 film at the Academy of Music. Little did we know when we embarked on this first NEA Big Read that we’d have six more Big Read adventures!