New England is probably not the first place that comes to mind when you think of dinosaurs. Yet, before the word dinosaur was even coined, some of the first dinosaur remains in the United States were found in the Connecticut River Valley! Certainly native peoples and, later, colonial settlers had seen these footprints impressed into the sandstone, but it wasn’t until 1835 that the “fossil footmarks” were discussed in scientific terms. A scientific and religious “conversation” about the tracks was begun by Edward Hitchcock, native of Deerfield and student at the early Deerfield Academy, whose original building now houses Memorial Hall Museum. 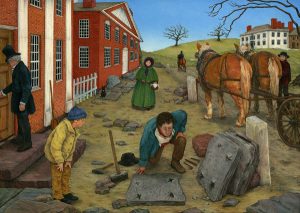 Dexter is a dramedy for all ages with most roles played by Piti Theatre’s Youth Troupe and music by Northampton singer/songwriter Carrie Ferguson. The movie 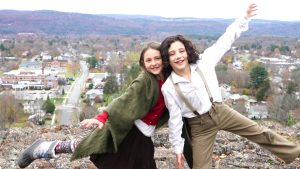 tells the life story of Dexter Marsh, a day laborer turned citizen scientist who discovered dinosaur tracks in front of Greenfield’s Town Hall in 1835 – before the word dinosaur had been invented. The preview version of the film was seen to much acclaim at the Great Greenfield Dinofest in December. Watch the new recorded event here. Run time: 30 minutes, plus 30 minutes of discussion.

Funded in part by the New England States Touring program of the New England Foundation for the Arts, made possible with funding from the National Endowment for the Arts Regional Touring Program and the six New England state arts agencies. Pocumtuck Valley Memorial Association is the fiscal sponsor.

Since 2010, Jurassic Roadshow has been bringing the science, history, and art of the Connecticut River Valley’s dinosaur footprints and trace impressions to street fairs, craft shows, and other events. Visitors are encouraged to bring in their own rocks or fossils from home to learn more about them from professional paleontologists and geologists. Every bit as much fun as it is informative, the show is for anyone of any age who is curious about the world!

Click here to learn more about this fascinating project, sponsored by the Pocumtuck Valley Memorial Association with the support of the Pioneer Valley Institute and funded in part by the Massachusetts Cultural Council, a state agency.