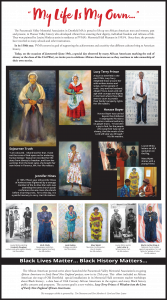 The Pocumtuck Valley Memorial Association in Deerfield MA is proud to lift up ten African American men and women, past and present, in Pioneer Valley history who developed vibrant lives ensuring their dignity, individual freedom and richness of life. They were painted by Louise Minks as artist in residence at PVMA’s Memorial Hall Museum in 1993/4. Since then, the portraits have traveled to many schools and other institutions.

In its 150th year, PVMA renews its goal of supporting the achievements and creativity that different cultures bring to American history. On the occasion of Juneteenth, 2020  (June 19th, a special day observed by many African Americans marking the end of slavery at the close of the Civil War), we invite you to celebrate African Americans are as they continue to take ownership of their own stories.

A .pdf of the newspaper exhibit is available here.