Don’t Smile for the Camera 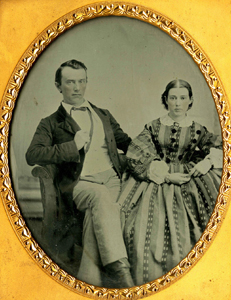 Another Angle on
Early Photography

“Today we’re conditioned to smile for the camera, but early photographs reveal a different social convention, one that frowned upon excessive familiarity,” explains Memorial Hall Museum Curator, Suzanne Flynt. “A smile, particularly a teeth-revealing smile, could be perceived as unbecoming or inappropriate.” With the advent of photography in the 19th century, people from all walks of life could have their likeness taken. But traditional portraiture had shaped the way people presented themselves. Having a portrait taken was considered a serious matter and there was little spontaneity in the experience. Deportment, expression, clothing, and surroundings were all carefully scripted.

What changed? When photography entered the sphere of the art world, Pictorial photographers such as Frances and Mary Allen saw their subjects differently. They didn’t ask people to smile, but used poses and lighting to capture an idealized scene or evoke a mood, sometimes even facing their subjects away from the camera. It wasn’t until photography was made accessible to all through new technology that the camera was taken out of the studio and into the hands of family and friends, that people wereencouraged to ham it up and “put on a happy face.” Now we rarely even have to be told to “smile for the camera!”

Don’t Smile for the Camera also includes albums and early photography advertisements. The exhibition is on view daily from 11 a.m. to 5 p.m. through November 1, 2009.

Read a review of the exhibit by Michael Miller in The Berkshire Review.